August 5, 2018:Â  Rachel and Michael won the silver medal at the Asian Trophy.

July 27, 2018:Â  Rachel and Michael started their season with a silver medal win at the Lake Placid Ice Dance International.

January 7, 2018:Â  Rachel and Michael finished fifth in their senior debut at the U.S. Championships.Â  They are second alternates to the 2018 Olympics and have been assigned to Four Continents from January 22-28 in Taipei City, Chinese Taipei.

March 18, 2017:Â  Rachel and Michael set a new personal best in the free dance at the 2017 World Junior Championships, scoring 97.54 and finishing with a point total of 164.83, winning the gold medal and their first World title.

March 8, 2017: Rachel and Michael were guests on IceNetwork.com’s ‘Ice Talk‘.

September 30, 2016:Â  Rachel and Michael were interviewed for a feature onÂ GoldenSkate.com titled, Parsons and Parsons: â€œWe are always trying to improveâ€. 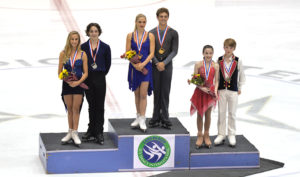 Rachel & Michael Parsons launched their 2017 figure skating season in great form this week at the Lake Placid International, in Lake Placid, New York. After a stellar performance in the short dance, earning a segment score of 66.15 with their new hip-hop inspired short dance program, they went on to secure the Gold medal with a superb performance in the free dance, earning a 90.02 segment score and a total score of 156.17 — their best season start yet. Team USA’s Chloe Lewis & Logan Bye earned a 135.90 and Eliana Gropman & Ian Somerville earned a 128.33 to round out a sweep of the medal stand by Team USA.

Video of both of their new programs is now posted on YouTube (short dance / free dance).

The 2016-2017 skating season is off to a great start. Next, Rachel & Michael will be traveling abroad to represent the United States on the Junior Grand Prix circuit this Fall, then to the U.S. National Championships in Kansas City in January. They’ll finish their season at the 2017 World Junior Championships in Taipei. We’ll keep you posted on their progress!

March 26, 2016: Â Rachel & Michael, along with training mates and friends Lorraine McNamara & Quinn Carpenter, were profiled in an article in the Baltimore Sun titledÂ Two local ice-dancing pairs back from Hungary and closer than ever.

January 24, 2016: Rachel & Michael won the silver medal at U.S. Nationals.Â  They will next represent Team USA at the 2016 World Junior Championships in Debrecen, Hungary.

November 25, 2014: Team Parsons placed second for the Silver Medal at Eastern Sectionals, after finishing 1st in the Short Dance and a close 2nd in the Free Dance, and recording new all-time personal best scores of 62.96 in the Short Dance, 88.46 in the Free Dance, and 151.42 overall. They once again qualify for the U.S. National Championships in January, 2015, in Greensboro North Carolina, where they will compete with top teams from all three Sections for the U.S. national title.

October 11, 2014: Rachel & Michael finished second at the JGP event in Croatia. They are first alternates for the JGP Final.

September 14, 2014: Rachel & Michael won the bronze medal at JGP Nagoya TV Cup in Aichi, Japan. They will next compete at the Croatia Cup in Zagreb, Croatia from October 8-11, 2014.

September 2014: Rachel & Michael Parsons will represent Team USA at this yearâ€™s Junior Grand Prix in Nagoya, Japan, September 10 â€“ 14th. The competition will be streamed live on the ISU YouTube JGP channel: https://www.youtube.com/user/ISUJGP2011. Results will be posted at: http://www.isuresults.com/events/fsevent00051552.htm

August 2014: Rachel & Michael took home the Gold Medal in their group in both the Short Dance and the Free Dance at this yearâ€™s Lake Placid Ice Dance Championships.

September 2013: Off to Slovakia for our first Grand Prix of the year!

August 2013: Michael and Rachel have had a great start to their 2013 – 2014 Season so far, winning 1st and 2nd at Chesapeake and now 1st and 2nd in Lake Placid too! We always enjoy the beautiful Adirondack summer weather. So great to see everyone too. Michael has fully recovered and we’re looking forward to a great new season.

January 8, 2013: Rachel & Michael were forced to withdraw from Nationals due to an ankle injury Michael sustained last week. The 2012-13 season had started strong for them and included their first JGP medal (a bronze), a silver medal at the 2013 Eastern Sectional Championships, and new personal-best scores. They were looking forward to competing at Nationals and wish their friends and fellow competitors the best of luck in Omaha. Hereâ€™s a link to their 2013 Free Dance from the Eastern Sectionals.

November 2012: Rachel and Michael took home the Silver medal at the 2013 Eastern Sectionals in Hyannis, MA. They turned in a new person-best score (79.30) to win the Free Dance, with another strong Short Dance performance, to win 2nd place overall with their best combined score yet (135.64). Now itâ€™s on to nationals in Omaha in January!

October 2012: In their second Junior Grand Prix assignment this year (in Zagreb, Croatia), Rachel & Michael put in two personal-best performances, winning 2nd place in the Short Dance and 3rd overall to bring home the Bronze Medal, their first in international competition. Here are the full results and videos of their short dance and free dance. They complete their second Junior Grand Prix season ranked 13th out of 70 teams in the final JGP world standings, their best finish yet.

September 2012: Michael and Rachel traveled to Linz, Austria, to compete in the Junior Grand Prix event on September 12th, finishing 4th in the Short Dance and 6th overall. The ISU site has the full results and videos of their short dance and free dance on their YouTube channel.

July 2012: Michael and Rachel will travel to Linz, Austria, for their second Junior Grand Prix event September 12th. The ISU will post live results and almost-live video on their You-Tube channel.

November 2011: Rachel and Michael won the silver medal at the 2012 Eastern Sectional Championships.

August 2011: Rachel & Michael finished 9th out of 21 teams competing in the 2011 Baltic Cup in Gdansk, Poland, in their first Junior Grand Prix Assignment.